Have you always wanted perfect nails but worried that your nails are too damaged? Wilde-Pedique have the answer! Developed by Light Concept Nails (LCN), Wilde-Pedique is a restorative gel nail polish which provides a temporary cosmetic improvement to damaged and unsightly toenails. 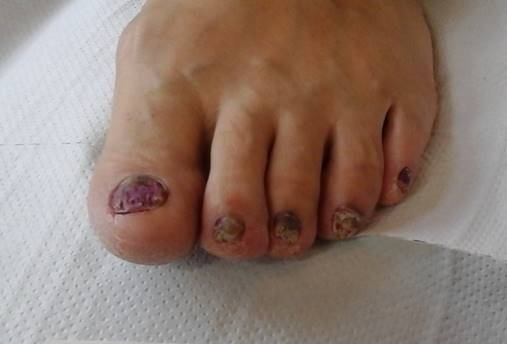 In contrast to the nail wraps or acrylics you would find in salons that are glued or bonded to the nails – which can be too brittle or damage the nail. They can also allow moisture between the layers of nail causing damage. However, Wilde-Pedique gel is specially designed to bond to the exposed nail where it will stay until the nail grows out – usually 3 months. However, at LNLC we suggest removing the gel after 6 weeks, so the nail gets the best chance of growing out well.

This treatment can be applied to any nail condition including psoriatic nails or nails requiring protection from infection due to vertical splits, and also diabetic patients – provided there is a nail to attach to. This includes loosely attached or lifted nails, damaged nails and thick or fungal nails that don’t grow fully or are deformed.

Fungal Infections: Wilde-Pedique gel contains an antimycotic agent called Piroctone Olamine which provides protection to your nail and also helps with fungal infections. The gel will not only improve the look of the nail, it will also stop any tenderness by being a protective cover and help keep the infection at bay. Please note, we do not advise its use as a standalone treatment for nail fungus.

Traumatised Toenails: If your nails have been damaged by being stubbed/bruised while playing a sport, wearing tight shoes or just simply being trodden on, Wilde-Pedique gel instantaneously improve them. As with fungal infections, it will also provide a protective cover, helping with any pain or tenderness. Temporary damage, such as sport impact, wearing tight shoes or stubbing usually repairs itself as the nail grows under the gel. Though we do discourage using Pedique on healthy nails or for too long.

Pedique for men: This treatment is not just for women as the gel can also be applied to men’s nails – though we tend not to cover them in varnish as it can look less natural. We will do our best to match the colour by mixing. As well as sealing the nail, the gel will look much better than a discoloured or infected nail.

It can take 15-45 minutes to prepare the nail and apply the Pedique. The gel will set before you leave and be ready for varnishing immediately. Contact us now to book an appointment.